Will Karen Civil Ever Say Anything Bad About Lil Wayne?

No this isn’t a “Karen Civil sucks” post, so if you’re here to see YoRapper take a number 2 on Karen please leave now. This is a YoRapper taking a number 2 on the state of hip hop taste-making. You see I learned from The Source’s battle with XXL many years ago that coverage can be bought and it will be bought to make money. If you’re too young to remember what happened let me speak on it a bit. The Source magazine was for a time, the biggest taste maker in hip hop. It gave us, fans, direction as to what was worth checking out. When they reviewed an album and it got the coveted 5 mics, we stopped and paid attention. If your album got a bad review, your music career was pretty much toast. You see The Source had real power. They were trustworthy because they had a great track record of picking winners: Biggie, Eminem, DMX, Big Pun, Jay-Z, Snoop Dogg spring to mind. However they too were ultimately corrupted by money and self-interest. As a result, The Source fell off. No one cares about a Source review anymore. It doesn’t hold any weight. It has lost its trust. Once you’ve sold out, you’re opinion holds no weight. You’ve sold your soul.

Everyone Gets an XL

The problem is everyone has to sell out. We have to make money. This is no different with bloggers. The problem is websites give away the content for free, so we can’t survive without advertising or sponsorship. I started YoRapper in 2007 because I realized that reviews had an inherit bias because of financial gain. XXL is filled with ads from Interscope and Universal, do you think they’re going to give a bad review to any of their artists? No. Remember, “don’t bite the hand that feeds you”. That’s why every album gets an XL rating. I haven’t taken a XXL review seriously in over 5 years. So it’s no wonder that hip hop blogs instead of critiquing the music, just post the music as some kind of implicit co-sign. But this kind of co-sign can be bought as well.

For only $600 you too can have your video on Worldstar. Yup that’s right. That’s all it takes to buy influence. As an experiment someone should purposely make the worst video ever and pay to have it on Worldstar. Oh wait that already happens, except it’s not an experiment. The problem with Worldstar selling its influence is that eventually people are going to stop watching those label submitted videos. You can already see the traffic numbers go down on those videos, because THE PEOPLE CAN’T BE FOOLED. Sure you can trick us once, but that’s all you’re getting.

Don’t Bite the Rapper that Feeds You

So what does this have to do with Karen Civil? Well it’s no secret she’s in the pocket for Young Money. She’s officially Young Money’s Social Media Coordinator. And though she likes to maintain that she is a trusted taste-maker, I have a hard time believing this. Let’s look at a recent post she did for Lil Wayne’s song Celebrate. Now I’m a Weezy fan and all, and if you guys read my reviews you’ll know I’ll probably say something snarky like, “This sounds like a throwaway from Rebirth, which in itself should have been a throwaway” or something like that. Here’s what Karen said about this song. 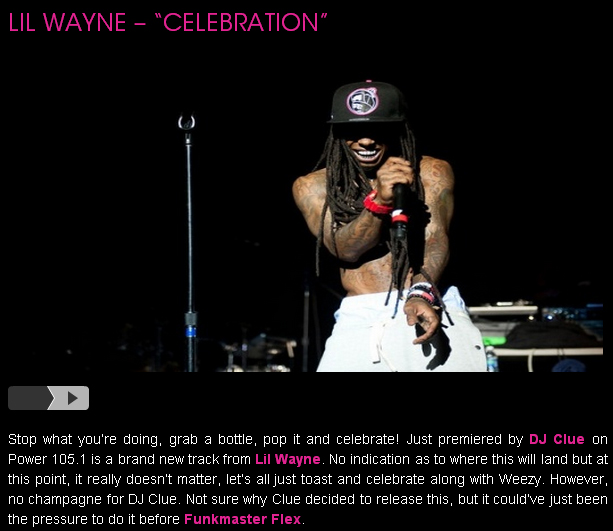 Awwww yeah. Let’s stop what we’re doing and listen to another sub-par Lil Wayne song, like their ain’t millions of them floating around right? But hey I don’t want to attack her, it’s cool if that’s her opinion. Your taste in music is subjective right? Okay. But hip hop more than ever needs unbiased view points. If you don’t know what this means it means REAL TALK. We’re dying for a filter. There’s no way you could hear that song and genuinely say “STOP THE PRESSES GUYS!”. But you know what I don’t blame her. How can Karen be unbiased when Lil Wayne rocks a Karen Civil wristband? [sidebar: Yes that’s right, Karen has her own line of wristbands.] If she says something critical about Weezy, he’s not going to rock her wristband anymore and if she keeps it up Birdman will call her into the office and say “You’re fired”. I’m happy that Karen is getting paid and is successful, we need more people like her. However, things like this make me question where her loyalties lye. Are they with the people that pay her or her readers? Remember, “Don’t bite the hand that feeds you”.

I’ve done some pretty stupid things trying to monetize YoRapper.com but I learned that it’s more important to avoid a conflict of interest especially where my readers are concerned. Imagine I worked for G.O.O.D Music? Would you take my opinion seriously about G.O.O.D Music artists? Taste-making is like making music, once you betray your fans, it’s over. How can anyone take Karen, or any of these bloggers-for-hire, seriously? They have sold their influence. But I know, I know, she’s paid right?